7 Most Famous Poems by Robert Frost 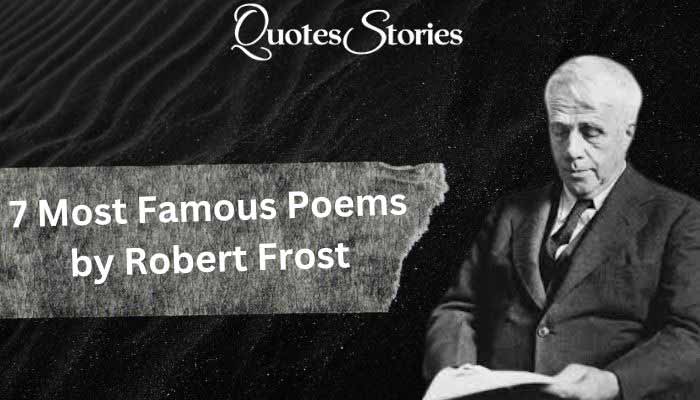 Robert Frost Poems – Robert Frost, an American poet, was born on March 26, 1874, in San Francisco, California. His first two poems were published so close to the start of World War I that he was fully acknowledged as a great wordsmith in the publishing world. He won four Pulitzer Prizes and was a distinguished visitor at President John F. Kennedy’s inauguration in 1961 as the unofficial American “poet laureate.” He passed away at the age of 88.

We’ve shared the 7 Best Robert Frost Poems with you in today’s article. I hope you like these poems.

The Road Not Taken by Robert Frost

Two roads diverged in a yellow wood,
And sorry I could not travel both
And be one traveler, long I stood
And looked down one as far as I could
To where it bent in the undergrowth;

Then took the other, as just as fair,
And having perhaps the better claim,
Because it was grassy and wanted wear;
Though as for that the passing there
Had worn them really about the same,

And both that morning equally lay
In leaves, no step had trodden black.
Oh, I kept the first for another day!
Yet knowing how way leads on to way,
I doubted if I should ever come back.

I shall be telling this with a sigh
Somewhere ages and ages hence:
Two roads diverged in a wood, and I
I took the one less traveled by,
And that has made all the difference.

My November Guest by Robert Frost

My Sorrow, when she’s here with me,
Thinks these dark days of autumn rain
Are beautiful as days can be;
She loves the bare, the withered tree;
She walks the sodden pasture lane.

Her pleasure will not let me stay.
She talks and I am fain to list:
She’s glad the birds are gone away,
She’s glad her simple worsted grey
Is silver now with clinging mist.

The desolate, deserted trees,
The faded earth, the heavy sky,
The beauties she so truly sees,
She thinks I have no eye for these,
And vexes me for reason why.

Not yesterday I learned to know
The love of bare November days
Before the coming of the snow,
But it were vain to tell her so,
And they are better for her praise

God made a beatous garden
With lovely flowers strown,
But one straight, narrow pathway
That was not overgrown.
And to this beauteous garden
He brought mankind to live,
And said: “To you, my children,
These lovely flowers I give.
Prune ye my vines and fig trees,
With care my flowerets tend,
But keep the pathway open
Your home is at the end.”

Then came another master,
Who did not love mankind,
And planted on the pathway
Gold flowers for them to find.
And mankind saw the bright flowers,
That, glitt’ring in the sun,
Quite hid the thorns of av’rice
That poison blood and bone;
And far off many wandered,
And when life’s night came on,
They still were seeking gold flowers,
Lost, helpless and alone.

O, cease to heed the glamour
That blinds your foolish eyes,
Look upward to the glitter
Of stars in God’s clear skies.
Their ways are pure and harmless
And will not lead astray,
Bid aid your erring footsteps
To keep the narrow way.
And when the sun shines brightly
Tend flowers that God has given
And keep the pathway open
That leads you on to heaven.

A Boundless Moment by Robert Frost

He halted in the wind, and — what was that
Far in the maples, pale, but not a ghost?
He stood there bringing March against his thought,
And yet too ready to believe the most.

“Oh, that’s the Paradise-in-bloom,” I said;
And truly it was fair enough for flowers
had we but in us to assume in march
Such white luxuriance of May for ours.

We stood a moment so in a strange world,
Myself as one his own pretense deceives;
And then I said the truth (and we moved on).
A young beech clinging to its last year’s leaves.

All out of doors looked darkly in at him
Through the thin frost, almost in separate stars,
That gathers on the pane in empty rooms.
What kept his eyes from giving back the gaze
Was the lamp tilted near them in his hand.

What kept him from remembering what it was
That brought him to that creaking room was age.
He stood with barrels round him — at a loss.
And having scared the cellar under him

In clomping there, he scared it once again
In clomping off; — and scared the outer night,
Which has its sounds, familiar, like the roar
Of trees and crack of branches, common things,
But nothing so like beating on a box.

A light he was to no one but himself
Where now he sat, concerned with he knew what,
A quiet light, and then not even that.
He consigned to the moon, such as she was,
So late-arising, to the broken moon

As better than the sun in any case
For such a charge, his snow upon the roof,
His icicles along the wall to keep;

And slept. The log that shifted with a jolt
Once in the stove, disturbed him and he shifted,
And eased his heavy breathing, but still slept.

One aged man — one man — can’t keep a house,
A farm, a countryside, or if he can,
It’s thus he does it of a winter night.

Nothing Gold Can Stay by Robert Frost

Nature’s first green is gold,
Her hardest hue to hold.
Her early leaf’s a flower;
But only so an hour.
Then leaf subsides to leaf.
So Eden sank to grief,
So dawn goes down to day.
Nothing gold can stay.

This saying good-bye on the edge of the dark
And cold to an orchard so young in the bark
Reminds me of all that can happen to harm
An orchard away at the end of the farm
All winter, cut off by a hill from the house.

(If certain it wouldn’t be idle to call
I’d summon grouse, rabbit, and deer to the wall
And warn them away with a stick for a gun.)
I don’t want it stirred by the heat of the sun.

(We made it secure against being, I hope,
By setting it out on a northerly slope.)
No orchard’s the worse for the wintriest storm;
But one thing about it, it mustn’t get warm.

“How often already you’ve had to be told,
Keep cold, young orchard. Good-bye and keep cold.
Dread fifty above more than fifty below.”
I have to be gone for a season or so.

My business awhile is with different trees,
Less carefully nourished, less fruitful than these,
And such as is done to their wood with an axe—
Maples and birches and tamaracks.

I wish I could promise to lie in the night
And think of an orchard’s arboreal plight
When slowly (and nobody comes with a light)
Its heart sinks lower under the sod.
But something has to be left to God.

Romantic Poems: Short Love Poems For Him And Her

A Bird’s Nest: By James McIntyre | Birds Poem In English