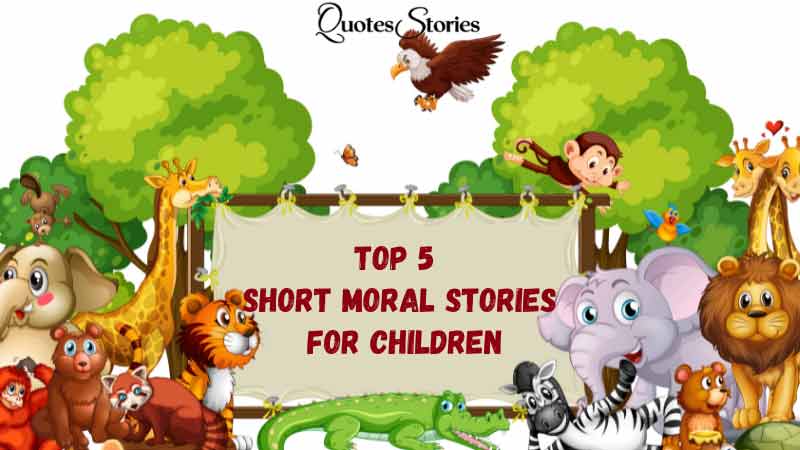 Kids Moral Story: Does your child like to listen to short moral stories? In today’s article, we present 5 moral stories for kids in English, and we inform you that stories help your child learn moral values.

The Lion And The Mouse ( Short Story For Kids )

One day, the lion was asleep in the jungle. A small mouse bounces up and down on the sleeping lion.

As he held up the squeaking small mouse, the lion exclaimed, “Aaargh!”

“Please let me go! Let me go! I will help you one day because of your kindness now! “The small mouse screamed.”You’re too little to help me!” The lion laughed and said, “Off you go!” as the little mouse ran away.

After a few days, the small mouse heard the lion’s roar, “Help me!” The small mouse was terrified, but it continued to walk until it came across the lion caught in the net!

“I see you’re in need of my help right now!” it said.”Please help me!” The lion roared in pain. The small mouse quickly started gnawing on the net and freed the lion. From that day, the lion and the mouse became friends!

The Moral Of The Story:- No one is too small to help! When you show kindness to others, you can reap the rewards.

The Fox And The Grapes ( Story For Kids )

Once upon a time, there was a fox. On a hot summer day, a fox wandered across the jungle in order to get some food. He was very hungry and desperately in search of food. He searched everywhere, but couldn’t find anything that he could eat.

His stomach was rumbling and his search continued. Soon he reached a vineyard which was laden with juicy grapes. The fox looked around to check if he was safe from the hunters. No one was around, so he decided to steal some grapes. He jumped high and high, but he couldn’t reach the grapes.

The grapes were too high but he refused to give up. The fox jumped high in the air to catch the grapes in his mouth, but he missed. He tried once more but missed again. He tried a few more times, but couldn’t reach. It was getting dark and the fox was getting angry. His legs hurt, so he gave up in the end. Walking away, he said, “I’m sure the grapes were sour anyway.”

Moral of the Story:- We pretend to hate something when we can’t have it.

The Bear And The Two Friends ( Moral Story For Kids )

One day, two friends were walking through the forest. They knew the forest was a dangerous place and that anything could happen. So, they promised to remain close to each other in case of any danger.

All of a sudden, a big bear was approaching them. One of the friends quickly climbed a nearby tree, leaving the other friend behind.

The other friend did not know how to climb, and instead, followed common sense. He laid down on the ground and remained there, breathless, pretending to be dead.

The bear approached the friend lying on the ground. The animal started to smell his ear before slowly wandering off again because bears never touch those who are dead.

Soon, the friend who hid in the tree came down. He asked his friend, “My dear friend, what secret did the bear whisper to you?” The friend replied, “The bear simply advised me never to believe a false friend.”

Moral:- A true friend will always support and stand by you in any situation.

The Fox And The Stork ( Short Moral Story For Kids )

One day, a selfish fox invited a stork for dinner. Stork was very happy with the invitation – she reached the fox’s home on time and knocked at the door with her long beak. The fox took her to the dinner table and served some soup in shallow bowls for both of them. As the bowl was too shallow for the stork, she couldn’t have soup at all. But, the fox licked up his soup quickly.

The stork was angry and upset, but she didn’t show her anger and behaved politely. To teach a lesson to the fox, she then invited him for dinner the next day. She too served soup, but this time the soup was served in two tall narrow vases. The stork devoured the soup from her vase, but the fox couldn’t drink any of it because of his narrow neck. The fox realized his mistake and went home famished.

Short Moral of the Story:- A selfish act backfires sooner or later!

Once upon a time, in a desert far away, there was a rose who was so proud of her beautiful looks. Her only complaint was growing next to an ugly cactus.

Every day, the beautiful rose would insult and mock the cactus on his looks, all while the cactus remained quiet. All the other plants nearby tried to make the rose see sense, but she was too swayed by her own looks.

One scorching summer, the desert became dry, and there was no water left for the plants. The rose quickly began to wilt. Her beautiful petals dried up, losing their lush color.

Looking to the cactus, she saw a sparrow dip his beak into the cactus to drink some water. Though ashamed, the rose asked the cactus if she could have some water. The kind cactus readily agreed, helping them both through the tough summer, as friends.

Moral of the Story:- Never judge anyone by the way they look.

Short moral stories for kids are amazing for teaching valuable life lessons in a fun and meaningful way. Short tales are useful because They’re just the best choice for your toddler to concentrate on.