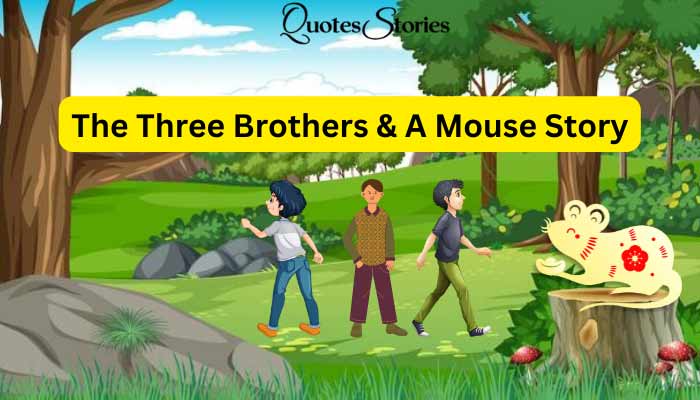 Fairy Tales Small Story: Today I’d like to share the best fairy tales story for kids with you.

Once upon a time, an old farmer lived in a village with his three sons.  All three of them were young and good-looking. The farmer was proud and happy with his boys.

One day, the old farmer thought that now he should marry off his sons, and finding a wife was a family tradition in his house.

He called his three sons and said “Take an axe and cut down a tree in our field. See in which direction the tree falls and look for your bride in that direction. But before you cut a tree you are in the field. Plant a sapling and promise me to take good care of it.”

The three sons obeyed their father. Each of them first planted a sapling and then cut down a tree.

You may also like to read, 5 Short Moral Stories for Children

The eldest son cut down a tree that had fallen to the north. The second son’s tree fell to the south. The tree of the youngest son fell in the direction of the jungle. His elder brothers made fun of him and laughed at him. The three brothers set out on their own journey.

The eldest son traveled to the North and proposed to the girl he had always loved. She immediately accepted his proposal.

The second son traveled to the South and proposed to his sweetheart. She immediately agreed to him.

The youngest son went to the jungle and traveled for a long time, but he didn’t see any humans. He was very frustrated and tired.

So he went to find shelter and found a small hut in the forest. Seeing this, the youngest son was stunned. Only one mouse was present small hut. Also, read Kids Moral Story

The youngest son portrayed the full story to the mouse, but the mouse informed him that there would be no girls in this forest. The little mouse introduced herself as the youngest son’s bride. She began trying to convince the youngest son. She danced and sang a wonderful song for him.

The mouse entertained the tired youngest son. The mouse was waiting for the youngest son’s decision when the dance and song were over.

She was looking at him with reverence. “I will accept you as my sweetheart,” said the youngest son. The mouse was very happy to know this. She assured him that she would wait for him.

The three brothers went back home. All of the brothers told their father about their sweethearts. The elder brothers teased the youngest son once more, but he didn’t mind at all.

After a few days, their father decided to put the wives to the test. “I want to take a test of all the brides,” he told his boys. He requested them to bake a loaf of bread for him.

Both elder brothers agreed, but the youngest son remained silent. He was concerned since he knew a mouse couldn’t make a loaf of bread.

She leaped down and rang a little silver bell three times. Hundreds of mice came out of nowhere as they listened to the sound.

The mouse ordered, “Each of you fetch me a grain of finest wheat.”

When they returned, they had a grain of excellent wheat with them. The mouse made a delicious loaf of wheat bread after collecting the grains.

After eating all of the bread loaves, the father decided to conduct another test. “I want each of them to weave something for me now,”  the father said.

Also, read The Princess and the Pea Story

Both brothers were aware that their beloved were skilled weavers. The youngest son, on the other hand, was well aware that mice cannot weave.

He went to the forest hut. The mouse had the feeling that he was worried. She asked the reason. The mouse rang the silver bell three times right away. Hundreds of mice came and sat in front of her, awaiting her instruction.

“Each of you will bring me the best flax fiber!” The all mice obeyed her order and vanished.

They brought the finest flax fiber with them when they returned. The mouse wove a lovely piece of fine linen. She stored it in an empty nutshell since it was so transparent.

The youngest son returned home with the nutshell. His two brothers presented their sweethearts’ woven items. The eldest brother received coarse cotton, which was fine. The second son brought a cotton and linen combination that was better.

Then, The youngest son put forward the nutshell. His brothers, as usual, mocked him. As their father opened the package, their laughing faded. He took out the best linen cloth. Their father admired the youngest son’s bride’s weaving. “You three may now bring your sweethearts home.” I’d like to meet them all. “Bring them tomorrow,” father said.

The mouse was happy to hear this. She rang the silver bell, put on a nice outfit, and asked for a carriage and five carriage drivers. when the carriage arrived, Five mice were painting a nutshell on a carriage.

The mouse was seated in the carriage, which had a footman in the back and a carriage driver up front. To get to The youngest son’s house, they set off.

They came close to a village while walking through the forest. There was a river in the middle. They had to cross the river via the bridge.

A man appeared out of nowhere in the opposite way as they were crossing it. He noticed a swarm of mice facing him. He laughed and stooped down into the water. The youngest son was very sad for the mouse. But the man laughed and walked away.

Saying this, The youngest son turned and saw a beautiful carriage standing on the other bank of the river. It was being pulled by five gleaming horses. The most lovely lady was sitting in the carriage. The youngest son was happy to see the carriage’s attractiveness. He began going towards his house. As he neared the carriage, he realized it was the mouse carriage.

Both his brothers were jealous of him. The youngest son received the princess because he was submissive to even a small mouse. The youngest son’s father blessed them and they got married. And they began to live happily ever after.