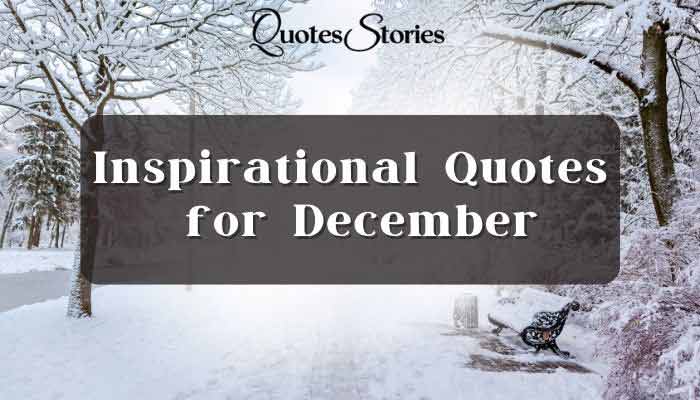 December Quotes: December is our last chance to end the year successfully. December is the best month of the year to reflect and set goals for the new year. I’ve created a list of December Quotes to inspire you to enjoy this time of year. Enjoy the holiday season and get ready to make the coming year even better than the one before.

1. This looks like a December day, it looks like we’ve come to the end of the way. ― Willie Nelson

2. As we look to the new year, hold on to what is good. Let go of what is bad. It really is that simple. ― Mandy Hale

5. t is December, and nobody asked if I was ready. ― Sarah Kay

6. God gave us memory so that we might have roses in December. ― James M. Barrie

7. Year’s end is neither an end nor a beginning but a going on, with all the wisdom that experience can instill in us. ― Hal Borland

8. December has the clarity, the simplicity, and the silence you need for the best fresh start of your life. ― Vivian Swift

11. Year’s end is neither an end nor a beginning but a going on, with all the wisdom that experience can instill in us. — Hal Borland

12. What good is the warmth of summer, without the cold of winter to give it sweetness? — John Steinbeck

13. So quiet and subtle is the beauty of December that escapes the notice of many people their whole lives through. Colour gives way to form: every branch distinct, in a delicate tracery against the sky. New vistas, obscured all Summer by leafage, now open up. — Flora Thompson

14. In December ring Every day the chimes; Loud the gleemen sing In the streets their merry rhymes. Let us by the fire Ever higher Sing them till the night expire. — Henry Wadsworth Longfellow

15. In December people give no thought to the Past or the Future. They think only of the Present. — Carolyn Wells

16. A long December and there’s reason to believe, maybe this year will be better than the last. — Adam Duritz

17. Each year of your life is a wonderful ride, with the most hopeful time being when December turns the keys over to January — Efiosiugbore Adebayo

18. Become the highest, grandest vision possible for your life because you become what you believe. — Oprah Winfrey

19. The sun that brief December day Rose cheerless over hills of gray, And, darkly circled, gave at noon A sadder light than the waning moon. — John Greenleaf Whittier

20. December drops no weak, relenting tear, By our fond Summer sympathies ensnared, Nor from the perfect circle of the year Can even Winter’s crystal gems be spared. — Christopher Pearce Cranch

21.If you are feeling some December blues, or even depression, don’t fight it. Instead, do something for yourself. Be reflective. Let the emotions exist. And be encouraged that, like me, you can get to a better place, but it can take time. — Brad Feld

22. If we make it through December, everything’s gonna be alright I know; it’s the coldest time of winter and I shiver when I see the falling snow. — Merle Haggard

23. It seems like everything sleeps in winter, but it’s really a time of renewal and reflection. — Elizabeth Camden

25. What freezings I have felt, what dark days seen, What old December’s bareness everywhere. — William Shakespeare

26. I know. I’m lazy. But I made myself a New Years’ resolution that I would write myself something really special. Which means I have ‘til December, right? — Catherine O’Hara

27. The December – January period is the strongest time of the year. It is an easy time to shift states of mind. — Frederick Lenz

28. A long December and there’s reason to believe, maybe this year will be better than the last. — Adam Duritz

29. November, I’ll give thanks that you belong to me. December, you’re the present beneath my Christmas tree. — Neil Sedaka

30. Of all the months of the year there is not a month one half so welcome to the young, or so full of happy associations, as the last month of the year. — Charles Dickens

31. When December comes, can ‘The Nutcracker’ be far behind? No, it can’t, not in America, anyway. — Robert Gottlieb

32. It is December, and nobody asked if I was ready. — Sarah Kay

33. You know what, December’s a funny time of the year, because the weather changes, the central heating comes on; sometimes you can get colds and coughs and flu. — Phil Taylor

34. A manager’s job is simple. For one hundred sixty-two games you try not to screw up all that smart stuff your organization did last December. — Earl Weaver

35. I have forgotten much, but still remember The poinciana’s red, blood-red in warm December. — Claude McKay