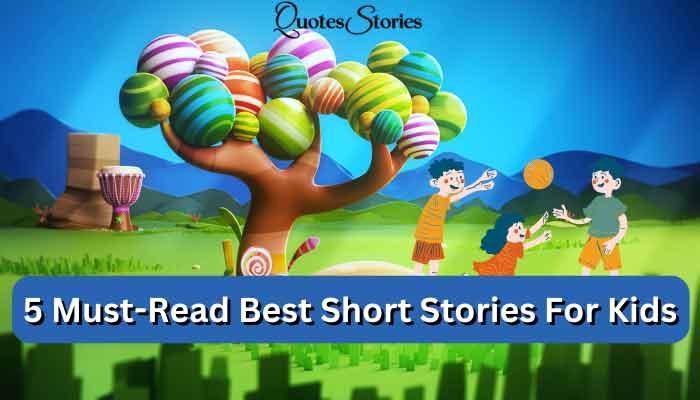 Short Stories for kids: Here is a collection of the best short stories for kids. You should recommend your children to read such stories. There is at least one lesson in every story. I hope you enjoy reading this story.

SO little Bridget took the baby on her right arm and a jug in her left hand and went to the farm to get the milk. On her way, she went by the garden gate of a large house that stood close to the farm, and she told the baby a story:-

“Last summer,” she said,” a little girl, bigger than you, for she was just able to walk, came to stay in that house she and her father and mother. All about the road just here, the ducks and the chickens from the farm, and an old turkey, used to walk about all day long, but the poor little ducks were very unhappy, for they had no pond to swim about in, only that narrow ditch through which the streamlet is flowing.

When the little girl’s father saw this, he took a spade, and worked and worked very hard, and out of the ditch and the streamlet he made a little pond for the ducks, and they swam about and were very happy all through the summer days.

Every morning I used to stand and watch, and presently the garden gate would open, and then the father would come out, leading the little girl by the hand, and the mother brought a large plateful of bits of broken bread.

The little girl used to throw the bread to the ducks, and they ran after it and ate it up quickly, while she laughed out with glee, and the father and the mother laughed too just as merrily. Baby, the father had blue eyes and a voice that you seemed to hear with your heart.

“The little girl used to feed the chickens too, and the foolish old turkey that was so fond of her it would run after her until she screamed and was afraid.

The dear father and the little girl came out every morning, while the black pigs looked through the bars of the farm-yard gate and grunted at them as if they were glad, and I think the ducks knew that the father had made the pond, for they swam round and round it proudly while he watched them, but when he went away they seemed tired and sad.

“The pond is not there now, baby, for a man came by one day and made it into a ditch again; and the chickens and the ducks from the farm are kept in another place.

“The little girl is far away in her own home, which the father made for her, and the dear father lives in his own home too in the hearts of those he loved.”

That was the story that Bridget told the baby.

There were two fishermen who were close pals. They used to catch fish together on weekends. Since they were busy with their personal work and family, they hardly spend time together. It was a Saturday and they decided to drive to a nearby pond to enjoy their day in fishing. Also, they wanted to have some feast with the fish they catch.

They sat at a distance and started hunting for the fish. The first fisherman got a big and beautiful fish in a few minutes. He was so happy and placed the fish in the ice box to retain the freshness. He decided to cook the fish as a whole fish in the noon. He spent some more time and captured a few more fishes. He decided to make a grand meal with the fish. Also, he froze a few fishes to take it back to home.

The first man was surprised at his act. He remained silent. The second man captured many big fishes, but he just put back all those fishes into the lake.

Very annoyed by his act, the first fisherman angrily asked him, ‘Are you mad? Why do you put your fishes back into the water? They were beautiful and big!’

The second fisherman replied, ‘I know they were big, but I don’t have the big pan to cook the big fish! So I’m looking for a smaller fish that fits my cooking pan! God is troubling me today.’

By hearing this, the first fisherman was surprised. He advised the second fisherman to cut the big fish into small pieces to suit in the pan and cook them properly.

Many people are just like the second fisherman. We are provided with handful of big opportunities, chances and even fortune that we many times overlook. We need to work out just the same like the big fish fit into a small pan.

It was a busy highway that connects all major roads in the city. People rush in their vehicles and it leads to chaos on the busy road. Driving vehicles beyond the speed limit became a major problem in the city.

He walked for a while and saw a 12 years old boy standing near a huge signboard ‘RADAR TRAP AHEAD’. The police officer wanted to move further to find out what exactly happened! Almost about 100 yards beyond the boy who stood with the signboard radar trap; there was another boy who stood with a signboard carrying the words, ‘TIPS’. Also, there was a big container almost filled three-fourths with money!

Everyone has their own strengths and weaknesses! Turning our weaknesses into strengths makes us unbeatable. This is an inspiring story of a 12-year-old boy Kim who defeated his weakness, by unknowingly making it his strength.

Poor Kim lost his left hand in a terrible accident. His parents could not console him. To cheer him up, his father made him join a Judo school. As the boy always wanted to learn Judo, his father thought that this would make him happy.

Everyone wondered how a single-armed boy could learn Judo. However, the master happily enrolled him. He trained in Judo for about 8 months. He practiced nothing but a single stroke. He trained for all 8 months in mastering a single stroke. The boy was surprised and sometimes annoyed as his master taught him only one stroke.

Yet, he said nothing. The boy mastered the stroke and grew as if nobody could excel in doing that particular stroke. The boy was picked by the master to compete in the national-level Judo championship tournament.

Everyone made fun of Kim and the master. How a one-handed boy could win a national championship? Even the boy was not sure about why his master chose him.

Surprising to others’ taunting, Kim easily defeated his six contenders with his single stroke. He gradually moved to the semi-finals. He struggled a bit in the semi-finals and won the match.

Needless to say, it surprised everyone. The final match began. The opponent was very strong and the boy could not counterattack him. The referee decided to halt the match, as the opponent could harm Kim severely. He announced a break and discussed with Kim’s master to stop the match and declare the opponent as the champion of the year. Even Kim was happy that he advanced very much and happily said yes! However, his master did not want him to quit the match. He asked Kim to continue the match. Of course, with a huge effort, Kim won the match and the title. He had become the champion!

Kim was so surprised how he won the competition with just a single stroke. His master told him,’My dear boy, you learned the most difficult stroke in Judo that very few can master to perfection. If your opponent wants to beat you and prevent you from using the stroke, they should hold your left hand. This is the secret behind your victory!’

If the boy turned his weakness, the loss of his left hand to a massive success, why can’t we?

Sinha, the farmer was a very lazy man. He had fertile lands, but because of his laziness, he cultivated crops only in a part of his land.

One night, it rained heavily and the roads turned muddy. Sinha was very happy that it had rained. He was to water the crops the next day. However, because of the heavy rain, he did not have to water them as the crops got sufficient water. However, he wanted to assess the status of his fields after the rain.

He also had two loads of hay to be sold at the market. Since the roads were muddy, he stayed at home. He decided to take a visit after two days, by which time, he hoped that the roads would be clean.

However, even after two days, the roads were still slightly muddy. Nevertheless, Sinha went to the market on a cart with horses. The road to the market was fairly good and he sold the hay. Then he took the country road and rode the cart towards his fields. But, the road was uneven and muddy with stagnant water.

He got down from the cart to look at the sunken wheel and searched all around for any help. However, help was hard to find, as people rarely took the country road, and all of them preferred the market road, which was much better.

Sinha started to curse himself for taking the bad road. Suddenly dark clouds appeared in the sky and it appeared that it was going to rain. Sinha lost his temper and started screaming, ‘Hell, there is no one to help me’.

Suddenly, he heard a booming voice from the sky, “Sinha, no one will help you unless you try to pull the wheel out by yourself.

Sinha then realized that he had done nothing to pull out the wheel from the mire. Sinha then removed the horses that were tied to the cart. He bent down and tried to pull out the wheel. After a few minutes of struggle, he gradually lifted the wheel from the mire. Supporting the cart with a shoulder, he pulled the wheel out. It was then Sinha understood that he succeeded, because he had tried. After that incident, Sinha realized his folly and was a changed man.